Judiciary and the BC First Nations Justice Strategy 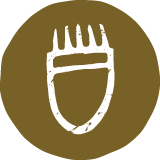 Judiciary and the restoration of balance is represented by a bear claw. A Syilx story speaks of the animal people meeting to discuss how they would help prepare the world for the People To Be (humans). Bear made the decision to sacrifice his life so that the People To Be would have food. It was Bear’s selflessness in the interest of the People that helped First Nations survive and be here today. Bear, and the bear claw, represents Elders and cultural traditions bringing balance back to decision-making.

The administration of justice includes a broad scope of functions related to the application of the legal system – such as legal orders, legal representation, prosecution, and the courts.

For millenia, First Nations had their own systems for the administration of justice, including legal orders and criminal justice institutions. Among the most damaging of colonial patterns has been efforts to marginalize and dismantle these functions. Concurrently, a common law justice system has been imposed that has long reflected and struggled with bias against Indigenous peoples. The end result is a contemporary reality where Indigenous peoples in British Columbia, and across Canada, are disproportionately and negatively impacted by the justice system, often with devastating consequences for individuals, families, communities, Nations, and society at large.

While constructive and important efforts have been made over many decades to improve the reality of the relationship of Indigenous peoples with the justice system, and some important steps taken, these efforts and achievements have never been comprehensive or transformative.

In this respect, the BC First Nations Justice Strategy represents a shift. It seeks to build upon efforts to date – such as First Nations Courts – and unite these within a transformative vision to both improve the current criminal justice and family law systems (Track 1), as well as support First Nations to reignite their ancestral legal traditions and systems (Track 2).

To advance the critical work in Track 2, a number of lines of action within the Strategy will support First Nations to re-establish their legal systems. This includes creating legislative and policy space to ensure First Nations systems are respected, such as through embedding administration of justice as a subject matter open for negotiations processes with the Crown, and reviewing existing provincial laws to allow for the recognition and operation of First Nations justice systems and institutions. It also includes efforts to provide resources and information to First Nations in the development of their justice systems and programming, through sharing a Guidebook describing leading practice amongst First Nations in this rebuilding work, and initiating a new long-term, sustainable, community-based justice programming fund.

Most of the lines of action within the BC First Nations Justice Strategy relate to Track 1 work to reform and increase the cultural safety of the justice system. These focus on three main topics:

All of the work in Track 1 and Track 2 is also supported by lines of action intended to increase the representation of Indigenous peoples in senior and decision-making roles and forums. This will include formalizing protocols between First Nations and Crown Counsel offices across the province, as well as increasing the number of First Nations people serving as prosecutors, judges, and community justice workers across both First Nations and non-First Nations justice systems.