Law Enforcement and the BC First Nations Justice Strategy 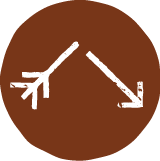 Policing / peace keeping is represented by a broken arrow. Arrows were used by many Indigenous Nations to represent war; the symbolic breaking of an arrow can signify peace.

Policing is most often the first aspect of a person’s interaction with the justice system. In the First Nations context, police forces have historically played a role in imposing colonialism, including forcible land dispossession, enforcement of the residential school system, and enforcing policies and outcomes in relation to First Nations children, which perpetuate conflict and apprehension. A direct by-product of these realities is that often when First Nations people require assistance, including protection by the police, they will not reach out for that help, thus allowing the perpetuation of other harms.

Transforming the relationship between First Nations and policing is also complicated by the multiple structures of policing across British Columbia. In different geographical areas the policing authority may be RCMP or a municipal police force. In many places there will be agreements in place between First Nations and the RCMP or local policing authority. The First Nations Policing Program also plays a role as a national program that provides enhanced policing for First Nations communities. The Program is cost shared between the Federal and Provincial governments and administered by the Province. Approximately 132 communities in BC are part of the program, through which they try to reset policing priorities and enhance policing services. Indigenous representation is also a major issue to be addressed.

Intertwined with these historical and structural factors are daily, on the ground challenges related to staff rotations, employee incentives, and patterns of relations that can impinge upon practices that build knowledge and respect between police and First Nations. Fostering direct, personal, and strong relations within communities is pivotal to change, something that is extremely challenging in regions where the RCMP, the national police force, operate.

Within this complex context, the Strategy envisions efforts both to transform the current law enforcement system, and to support First Nations to assume greater control of community-based policing – all underpinned by stronger working relationships and protocols.

Specifically, the Strategy seeks to transform mainstream policing through: embedding protocols that increase diversion and break the cycle of escalating engagement with the justice system experienced by First Nations people; participating in reform of the outdated Police Act; and, enhancing cultural safety and anti-racism training and associated accountability.

Through the Strategy, First Nations will be supported to assume greater control of community policing, through an expansion of the current community policing program, and implementation of required changes to Community Tripartite Agreements.

New relationships are critically needed in the policing sector. The BC First Nations Justice Council will develop protocols with the RCMP and local police forces across British Columbia to reset the relationship and support effective collaboration and coordination towards the shared goal of public safety and well-being.